Back to Aim Blog

I love fitness and being able to move my body when and how I want. I love challenging it with new loads, movements, and activities that build muscle, increase mobility, and are fun. This keeps my stress low and energy up while building a foundation of strength and resiliency that I carry with me throughout my day.

Fortunately, I get to treat others like me at AIM. I understand how life-altering it can be when you are unable to move and exercise the way you want when you want. I love getting my patients moving and feeling better, which in turn allows them to get back to the activities that put a smile on their faces and make their days better. 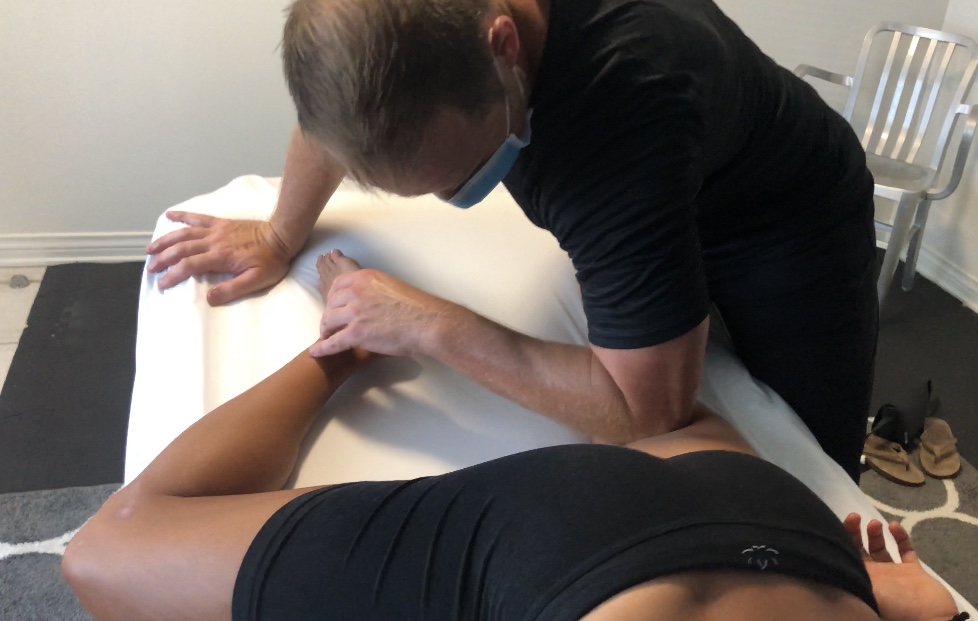 One of the first differences you'll notice as a patient is that the examination incorporates postural and functional movement assessments and muscle strength tests to determine postural issues, dysfunctional movement patterns, and potential weakness of individual muscles. These factors can all compromise proper function and lead to pain and injuries.

Example of me performing soft tissue work of the hamstring on a patient as part of her treatment.
Recently, I saw a 47-year-old female complaining of pain in her right gluteal region that traveled down the back of her leg and stopped at her knee. The pain was tight, dull, and "achy" with occasional sharpness with certain sudden movements. The onset had been slow over the previous two weeks, but she came to see me when she could no longer run. Running is a huge part of this patient’s life, so being unable to run for the past couple of weeks had led her to feel lost and very impatient with her family. The pain then started to show up while she was at work, which severely decreased her productivity. I understand how hard this type of alteration in lifestyle is, so I was excited to help her get moving and feeling better.

Upon examination, she tested negative for sciatica symptoms associated with a problem in her spine, so we had to do some more digging. Knowing that she's an avid runner and that the symptoms slowly developed while running, I then examined how well her right hip was able to stabilize her in a single leg position. In running, we never have both feet on the ground at the same time (it's a single-leg sport). Couple that with the increased ground force (6-8 times your body weight) while running, if she couldn’t balance well on the right leg while standing still, I knew she'd definitely be struggling to stabilize under the increased load of running —and that’s what we found. 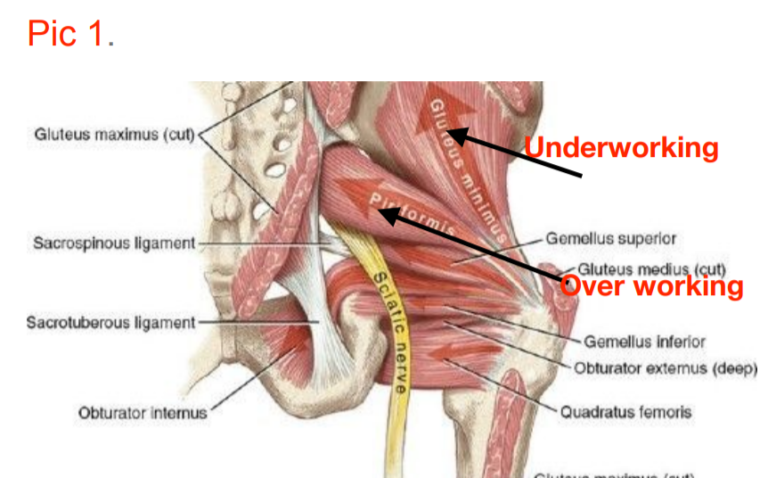 My patient was unable to stand longer than 5 seconds on her right leg, while on her left, she was good up to a full minute. Manual muscle testing of her right hip muscles found that her glute minimus and glute medius were weak and painful. In response, I applied deep pressure over the area of her piriformis, which recreated her symptoms. Her hamstrings still had a normal range of motion but were exquisitely painful to touch. We also found that the rotation of her hip was greatly reduced, and painful in external rotation. This led me to conclude that a couple of her hip stabilizing muscles (glute medius and minimus) were not providing a strong enough output, which forced other muscles (piriformis and hamstrings) to overwork in response. (See Pic 1.) Even though she was having sciatica-like symptoms, this is a case of "pseudo sciatica", where the sciatic nerve is getting compressed in the soft tissue of the body, and not at the spine.

Now we knew which tissues to address to get her better. When I needled into her piriformis, she reported that the needle was able to "touch" her pain in a way that she'd been trying to achieve with foam rollers, balls, and occasionally by recruiting her husband to apply massage to the area, to results that were pretty “half-assed” (her words, not mine). After the rest of the needling, she reported warmth and awareness that she had not felt for a while. This is what sports acupuncture does: it provides an input to stimulate blood, oxygen, and proprioception (body awareness) to a very specific area of the body. 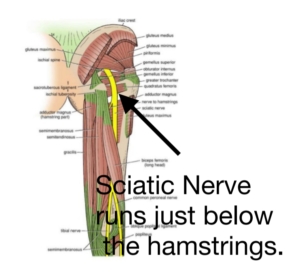 After the needling, we moved on to soft tissue work to decrease the tension in the hamstrings and gluteal area, which allowed the tissue surrounding the sciatic nerve to receive new blood and oxygen — which in turn, helped to decrease the sensitivity of the nerve.

My patient then went home with instructions on how to do a few exercises designed to increase the stability of her right hip, and help solidify the changes we had made on the table. She returned to a modified running schedule almost immediately.

During a course of treatment, I try to keep my patients participating in the activities they love, with modifications if necessary to keep it safe. We worked to figure out the right "dosage" of running that left her feeling like she was progressing without overdoing it. Even some running really helped to mitigate her stress levels, and with subsequent follow-ups, this patient was back to her normal pacing and mileage within 3 weeks of treatment.